*For a small fee to cover our administrative costs you can have access to the member’s area where you can read the latest news from shows around the world.  Learn More
News Updates
Monday, 28 February 2022

FCI condemn the invasion of Ukraine 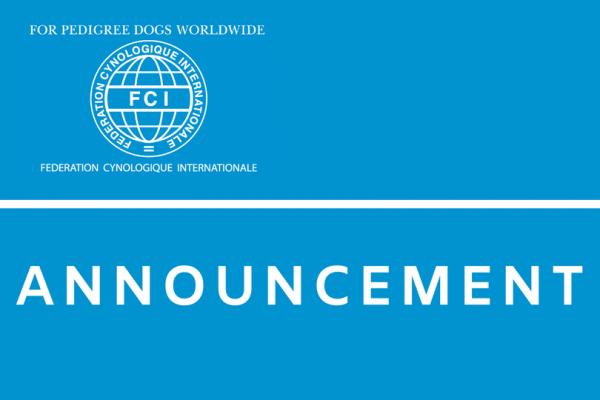 The FCI and its General Committee officially condemn the invasion of Ukraine by the armed forces of the Russian Federation. This conflict and aggression cannot leave anybody indifferent and we all feel concerned, sad, and angry.

The invasion of Ukraine by the Russian Army has also put entire families of our dog community in complete distress. This war has placed our breeders and their dogs at great risk, directly threatening their welfare and their lives. Many had to flee, others are surviving in precarious conditions, hiding in shelters where food and basic commodities are becoming very scarce. Yet, in these terrible and trying times, they did not abandon their dogs!

These horrifying circumstances contradict the written priorities and welfare recommendations of the FCI, as well as our policy and aims.

The situation has led the FCI General Committee to hold an extraordinary meeting on Sunday, 27 February 2022.

Important decisions were made, within the legal limits of the FCI and its General Committee, based on the FCI Statutes and Standing Orders.

From the 1st March 2022, and until further notice, the Russian Kynological Federation (RKF) will not be allowed to conduct - on the Russian Territory - any event wherein FCI titles or prizes are awarded (CACIB shows, CACIT trials, CACIAG competitions, etc.).

In order to give the opportunity to our Members/Contract Partners and any other persons to express their solidarity and help towards the Ukrainian people, their dog lovers/breeders/keepers, the FCI will open a bank account, specially for this purpose, where all donations are welcome and will be forwarded, with full transparency, to help the Ukrainian Kennel Union (UKU) and the Ukrainian breeders badly affected by the war and in serious need, living either in Ukraine or having fled to neighboring countries.

The FCI will contribute to this fund in a substantial manner. Further details will be communicated in the following days.
The FCI is a huge community, a united and strong family so let us all stand up and show our of solidarity for Ukraine!

More in this category: « Online dog show success Positive steps in the Chinese meat trade »
back to top