*For a small fee to cover our administrative costs you can have access to the member’s area where you can read the latest news from shows around the world.  Learn More
News Updates
Tuesday, 05 July 2022 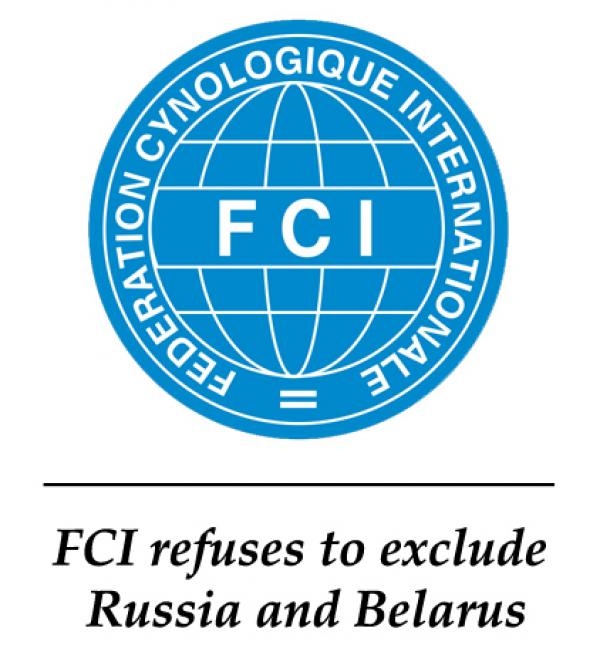 There have been angry responses to the decision by the Federation Cynologique Internationale (FCI) not to exclude Russia (RKF) and Belarus (BCU) from the FCI.

At the General Assembly 49 associations voted against excluding those countries, 21 voted to exclude them and there were three abstentions.

The Ukrainian Kennel Club called on the FCI, ‘to terminate the membership of Russian Kynological Federation (RKF) and Belorussian Cynological Union (BCU), as the representatives of the aggressor-countries who by their actions in the cynological world openly support the bloody politics of their governments, in the FCI according to the Art. 13.3 of the FCI STATUTES.’

Georgiy Onishchenko, UKU President, said in a statement, ‘The main aim of the FCI is support of humanity and protection of the dogs, but at this stage any inaction now by the FCI, by keeping in members of the RKF and BCU, and allowing them to work under the aegis of the FCI, regrettably directly sponsors the war, and supports the destruction of Ukrainian cynology.

‘The FCI must now follow the decisions of all European and world humanitarian, sports, and human rights organizations.’

Just after the Russian invasion, the FCI said in a statement, ‘The invasion of Ukraine by the Russian Army has also put entire families of our dog community in complete distress. This war has placed our breeders and their dogs at great risk, directly threatening their welfare and their lives. Many had to flee, others are surviving in precarious conditions, hiding in shelters where food and basic commodities are becoming very scarce. Yet, in these terrible and trying times, they did not abandon their dogs!

‘These horrifying circumstances contradict the written priorities and welfare recommendations of the FCI, as well as our policy and aims.’

An extraordinary meeting of the FCI banned the RKU to conduct any event where FCI prizes are awarded. It also set up a fund to help the UKU and Ukrainian breeders.

One poster wrote condemning the decision not to exclude the RKU or the BCU, ‘Did I expect the majority of country KC’s to support the UKU motion to exclude the Russian and Belarus KC’s from the FCI???

‘No, I did not expect it but of course I am sad and ashamed for those countries that supported the RKF and Belarus KC’s = supporting the war on Ukraine!!!!

‘This is another horrible blow against Ukraine, its people and all their dog breeders and of course the UKU (Ukrainian Kennel Union). I can say that my KC the Swedish KC supported the motion which makes me proud.’

It was alleged that the FCI closed down commenting on their Facebook page after people started to question its decision.
The Kennel Club banned judges and exhibitors from all KC competitions.

Vladimir Golubev, President of the RKF, told Veterinary Medicine and Life, ‘The discussion was not an easy one, but at the end of the day common sense and a sense of responsibility for dog welfare and the future of international pure-breeding prevailed.
‘On my part, I would like to point out, that Russian Kynological Federation does what is best for Russian breeders and dog owners. I’m convinced that no matter how bad things get, our love for dogs should remain our driving force and basic ground. Dogs don’t have nationality and, luckily, are not involved in politics.’

OUR DOGS approached the FCI for comment but we had not received a reply before we went to press.

More in this category: « President of the FCI on Ukraine FCI and WCF sign an agreement »
back to top