Next Shows
*For a small fee to cover our administrative costs you can have access to the member’s area where you can read the latest news from shows around the world.  Learn More 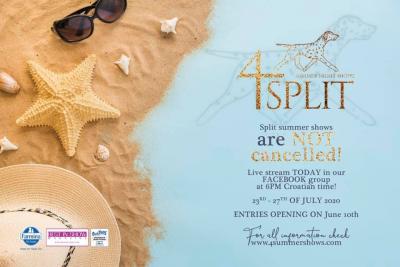 As we go to press OUR DOGS understands that the famous 4 Night Show in Split will go ahead in Croatia. The show is due to take place from July 23rd to the 27th confirms main organiser Ante Lucin.

It appears other Balkan countries are opening up and holding shows, such as a four day event in Bulgaria in late June.

Ante told OUR DOGS, “We will organize the shows with all the safety instructions from the epidemiologists. Croatia opened the borders for tourists as we have no cases now for ten days and we are trying to be extremely responsible and we are doing it because the epidemiologists and our Government said we can do it. Serbia, Hungary, Bulgaria are starting already this month with the International shows.

Above is the new list of judges for our 4 summer night shows in Split which we will try to organize as best as possible also this year! Soon we will publish the judges for the breeds and BIS and Supreme BIS judges. We are very sorry for the changes, but 11 judges from the original list unfortunately had to cancel. In the same way we are infinitely thankful to the ten judges who will join us this year

More in this category: Varaždin, Croatia »
back to top