Updated Shows
*For a small fee to cover our administrative costs you can have access to the member’s area where you can read the latest news from shows around the world.  Learn More
Tuesday, 15 June 2021 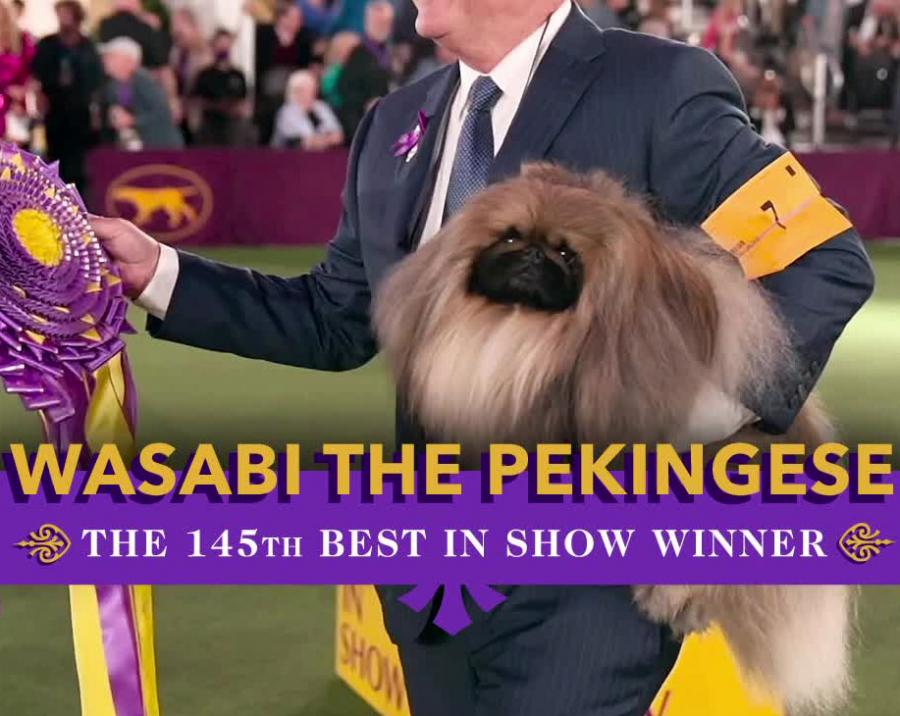 The Peke was presented, bred and co-owned by David Fitzpatrick.

The Best in Show Judge at this year’s spectacular was none other than the famous AKC All breed judge from California, Mrs Pat Craig-Trotter of Norwegian Elkhound fame. Before awarding the life size purple and gold ribbons to her Reserve and Best winner, Pat closed the event with a speech that touched many people’s hearts in the dog fancy as she spoke on behalf of all when saying ‘Not all pets are show dogs. But I can assure you, all show dogs are pets!’

Wasabi has BIS Westminster success in his blood as his grandfather, BIS BISS Am GCH Palacegarden Malachy, won Best in Show at Westminster back in 2012, also co-owned with handler, David Fitzpatrick who has great experience at this top level.

From 96 shows attended in 2020, Wasabi was crowned as Top Dog All Breeds in the USA. On Sunday evening after being awarded Best in Show, David Fitzpatrick said “So very proud of Wasabi, winning BIS under the living legend and icon, Pat Craig Trotter – The thrill of a lifetime from perhaps the top breeder ever!! The magic of Westminster was recreated at Lyndhurst!! An unbelievable event!!!”, “He has showmanship. He fits the breed standard. He has that little extra something, that sparkle, that sets a dog apart”

Westminster Kennel Club’s 146th show will return to its traditional home in New York City in early 2022. As usual the Empire State building in New York was illuminated with the famous show colours on the final night of the event

View the embedded image gallery online at:
https://ourdogsinternational.com/show-reports/rest-of-world/america/145th-westminster-best-in-show#sigProIda77b028d5b
More in this category: « 144th Westminster Show 2020
back to top