Updated Shows
*For a small fee to cover our administrative costs you can have access to the member’s area where you can read the latest news from shows around the world.  Learn More
Saturday, 17 September 2011 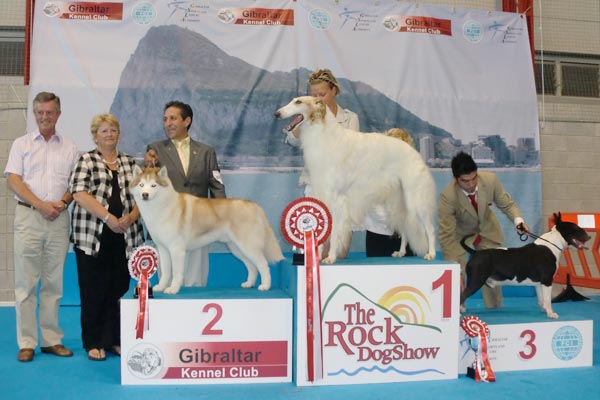 As the TV advert says, it does what it says on the tin…and our headline above does exactly that! OUR DOGS joined in with all the fun in Gibraltar last weekend and even met one of the famous furry inhabitants of The Rock. 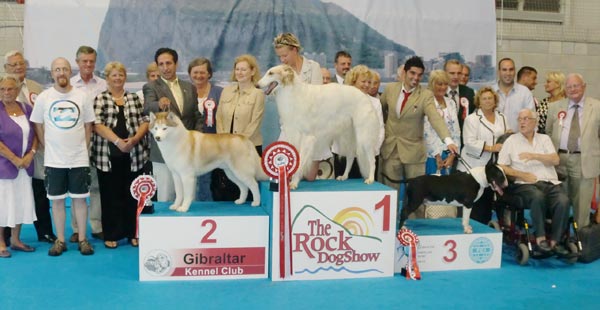 As the TV advert says, it does what it says on the tin…and our headline above does exactly that! OUR DOGS joined in with all the fun in Gibraltar last weekend and even met one of the famous furry inhabitants of The Rock.

Bearing in mind the geographical position of ‘Gib’ the committee were delighted to have over 1300 dogs each day being exhibited especially as this was their 20th show. It was truly an international event in terms of the dogs, the exhibitors and the judging panel.

We had two international shows over the two days , the 34th and 35th in the shows history, and of course the Crufts qualifier for 2012. David Lawlor represented Ireland on the panel and Lisbeth Mach the Swiss, but the rest of the judges came from the UK and Scandanavia.

In fact Liz Stannard judging many of the toy breeds and Paul and Maria Harding the Bulldogs, Dobermans etc drew excellent entries, perhaps some of the highest in their individual breeds that the society had attracted in recent years. Gordon and Penny Williams, regular visitors to the Rock went over many of the Gundog breeds.

They all found best of breeds that were worthy examples for the group and thoroughly enjoyed their weekend and the hospitality of the Gibraltar Kennel Club. Staying at the Rock Hotel, it was not far to the venue…nothing is in Gib as it is only six square miles in total! The show was held in the Victoria Sports Centre and is well supported by the authorities who are clearly delighted at the influx of exhibitors and tourists for the show. It was great to see the Governor of Gibraltar attend the show with his wife and also the Minister of Sport and Culture…showing the high esteem in which they hold the Gibraltar Kennel Club.

The border police must have wondered what hit them as a steady stream of camper vans and cars came over from Spain with many Spanish exhibitors and others from even further a field…including Italy, France and Scandinavia. For you geography buffs, there were exhibitors from a place that claims to be the world’s most northern city… Hammerfest… and that means a round trip of over 4,000 kilometers, so people were keen to attend.
OUR DOGS had a stand and also supported the show in a number of ways.

The principal winners are pictured here and there will be more information in OUR DOGS newspaper OCTOBER 7th in a Eurodogs Special.

For now enjoy these photos and remember if you do go to Gibraltar remember to shut the windows and balcony doors, otherwise you might have a visit from one of the hairy locals… and you might end up with no biscuits or sugar on your tea tray!

Our thanks to the Requenas, Brian and Elizabeth Gonzalez and Lawrence Llamas for a great weekend and super to see Pepe Requena attending most of the events after recent ill health.

When people think what an exotic life you lead jetting off to Gibraltar for the weekend those who are not judges wonder why we only manage to see the airport, the hotel, and the venue!

Such was the case with Gibraltar but the little I saw made me want to go back for a longer trip. Landing on the shortest runway I have ever been on right in the middle of the town and being able to see the commuters lined up waiting for the barrier to be lifted so they could carry on their daily work was certainly interesting. I realised later that some of the cars waiting to cross were coming in from mainland Spain not just to do duty free shopping but to go to the dog show.

As we realised throughout the weekend dog exhibitors had travelled from many countries some over 4000 kilometres away!! To see the vans and cars in the show car park with addresses and registration plates from as far as Northern Europe and Scandinavia certainly made our journeys from southern England to Scotland look like a short stroll.

As usual with most of the overseas shows the hospitality was second to none and the hotel the judges who had also come from all parts of Europe were staying in was overlooking the port and marina and right at the base of the famous Rock.

A number of judges were meeting up after only being on the same panels within the last few weeks in other parts of Europe and others we were meeting for the first time. Most if not all spoke perfect English so conversation was not a problem.

We were warned in the hotel not to leave our balcony windows open as there was every chance that the famous apes would come into the room and could be very spiteful if forcibly ejected!! I did so want to see one close up but no such luck. One of the judges Elizabeth Mach from Switzerland did have a visit from one who drank all her milk from the tea tray, and ate all the biscuits, but that was after she had gone off to judge! (See photos)
The judging was held in the Victoria sports stadium in the centre of town in fact right opposite the airport, so any exhibitor coming in by plane could actually walk to the show.

There were six large rings inside the hall and the same outside and I can assure you it was as hot inside as out as there was no way the air conditioning could work with the doors being open. Anyone who knows me well would have been amazed to hear me complaining about the heat but judging nearly 100 dogs in temperatures of 80 degrees was more than a bit tiring!

My breeds on the first day were Pugs, Chinese Crested (who have both brought very good entries with exhibitors from as far afield as Sweden) Jap Chins and Maltese.

BOB Pug was an Am.Ch. who went onto win the group under Renee Sporre Willes who judged the breed the following day when he won BOB again and the group under myself. Unfortunately the catalogue does not list addresses so I do not know where he lives. BOB Crested BOB had travelled from Sweden and he was placed in the group both days as was the Maltese who was handled by one of the many good looking young male professional handlers who were in and out of the rings in all that heat and always looked cool and calm and very well dressed in smart suits.

Each evening we were treated to a lovely alfresco dinner where a number of the committee joined us including Lawrence Llamas who is known to Chihuahua exhibitors over here and is grandson in law to the President Mr. Pepe Requena and his very busy wife Jose. The next day was just as busy and my breeds included Chis, Pekes and Yorkies. Again some very good dogs with excellent handlers and all well presented and good showers.
Both shows were Internationals so a number of dogs went home with more titles and on the Saturday there were Crufts qualifiers so competition was keen. The OUR DOGS stand was a good attraction and many exhibitors were buying Annuals and other items on the stand run by Vince Hogan and Charles Allen of Birdbrook, who had provided the show rosettes. OUR DOGS seems very popular over there.

All too soon the trip was over and dogs and judges made their way back to airports, ferries and long long drives but I am sure many of us look forward to coming back and seeing more of Gibraltar and next time giving ourselves chance to do some shopping in this tax free haven.

More in this category: « Success on the rock
back to top