Updated Shows
*For a small fee to cover our administrative costs you can have access to the member’s area where you can read the latest news from shows around the world.  Learn More
Saturday, 31 August 2019 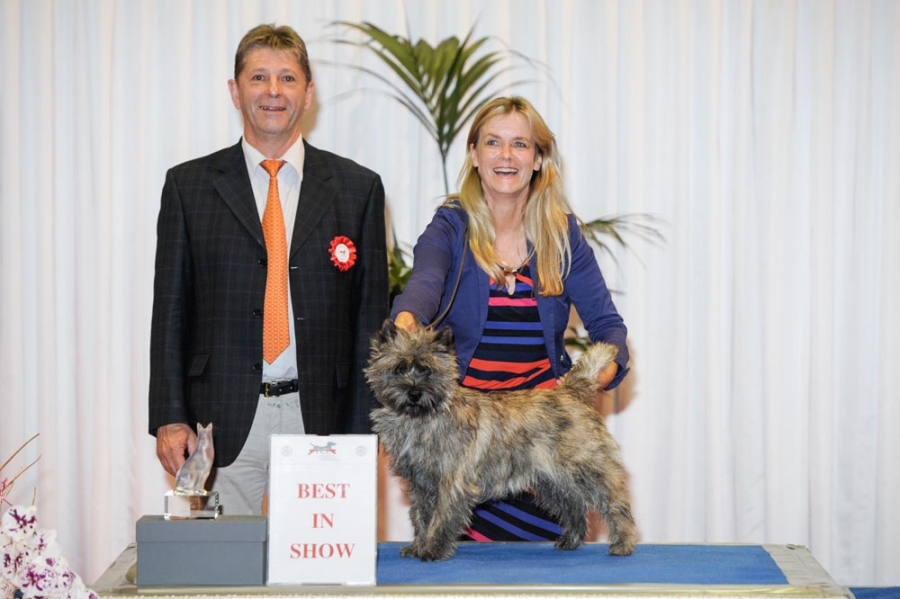 Best in Show at the Luxembourg autumn show was the Cairn Terrier, Limecastles Gangster Of Love, owned by Alice Zanchi from Switzerland. BIS Judge was Paul Jentgen (Luxembourg). Photos by Karl Donvil

Last year we didn’t have an autumn edition. The government ban on the Luxembourg shows was finally lifted and we saw a new start in Spring.

However, the impact was strong and that resulted in a decline in entry numbers. While in 2017 there were still 3,647 dogs present, this edition welcomed no more than 2,763. Regulations had an impact. The veterinarian control was very strict and that has possibly influenced the exhibitors from certain countries where rules are not always followed that strictly, at least that was one of the hypothesis.

View the embedded image gallery online at:
https://ourdogsinternational.com/show-reports/west-europe/luxembourg/luxembourg-autumn-2019#sigProId1ccc95c49e
A view on the entries was not clear on that. Notwithstanding this, there were exhibitors who took the risk to come while not in order with the regulations. They were not allowed into the show and their dogs were put in a quarantine area where they were taken care of very well. Maybe we still miss the experience of Mr and Mrs Schwab in composing an attractive judges panel. A look at the panel was maybe a little conservative. Building up experience takes time and we must say that the Schwabs were very talented.

The new board has had difficult times, but they are very confident that things will soon change for the better. There are the constructions around the expo area, but the new parking building is as good as finished and that will change a lot. The club is determined to never have a casualty due to health again. Unfortunately, there was a handler who left dogs in a locked car, but they were reported and there were no problems for the dogs in the car.

The video wall and live streaming were omitted as was the QR scanning when the dogs enter the main ring, a too expensive gadget and the benefits are questionable. But what works is still there, a large nice main ring, a big podium and an impressive trophy table with fabulous handmade glass trophies for the winner of each group and a dog statue for the Best In Show.

The board and team are very professional and everything is very streamlined from start to finish. The September edition always had not only fewer entries but less trade stands too, but now it was significant. In fact it is rather strange as it is a Crufts qualifying show. Some exhibitors thought also that the show counted for the Benelux Winner but that was not the case. New, at least for Luxembourg, was the Dog Dancing and the competition for Junior Handling, something that was never the case, at least not the last 10 years if I remember well.

But all this did not stand in the way of a correct timing for the start of the main ring and with the more simplified judging for Junior Class, the show ended again at a very reasonable time. The exhibitors were coming as usual from many different countries. The popularity of the Luxembourg shows is still alive as can be read in the excellent and complete catalog.

Twenty-five nationalities were present, all European countries. France had 803 entries, Germany 605, Belgium 476 and the Netherlands 326, and that are the neighboring countries. Italy did not have many participants this time with only 95. From the UK there were 46 dogs, a little more than the 43 from Russia.

The Judges panel was composed of 22 judges from 8 nationalities and the dogs/judging day rate was very high in fact with a score of 67.4. Especially on Saturday the judges were very occupied. Dirk Spruyt from Belgium was judging Group I breeds and had 122 dogs in total. Laurent Heinesche from Luxembourg had some popular Spitz breeds and came to a total of 97 entries.

From Croatia, Bojan Matakovic found no less than 61 Rhodesian Ridgebacks in his ring, and along with some other breeds he ended up with 107 dogs. Hans Erhard-Grütner from Germany had no less than 58 Pugs to judge and in total had 111 entries.

Jussi Liimatainen from Finland had the French Bulldogs and that was good for 73 entries and along with the other breeds he had, he finished with the best score on Saturday, 128 dogs. That was only two more than the score of Mr Boris Chapiro from France who had 126 entries, including 42 Chinese Cresteds and 28 Boston Terriers.

Along with his entries of Sunday he was the most popular judge of the weekend with 190 dogs, followed by Mr Liimatainen with 185. Mrs Marie-José Melchior from Luxembourg had 94 dogs on Sunday and that included 39 Newfoundlands and 48 Great Danes.

On Saturday she had 40 Cavalier King Charles Spaniels. Mr Guido Schäfer from Germany had 96 dogs on Sunday when he judged the Schnauzers among other breeds. There were a lot of Salukis entered for Mrs Martha Kips from Luxembourg. Finding 37 at a show is rather exceptional.

And it seems that the Rottweilers are gaining in popularity again. Mr Joel-William Frebourg found 36 in his ring. Mr Paul Jentgen from Luxembourg was the chosen one to judge Best In Show. His 3rd place went to the Bracco Italiano, Owlspoint Makin Trouble, owned by Scarlett & Mark Burnside from the United Kingdom.

This dog was entered in Junior Class and was chose by Mrs Myriam Vermeire as Best of Breed and by MrNorman Deschuymere as Best of Group. Second place was for the Shikoku, Roshi Jr-Miki van de Egmato, bred and owned by Egitte Veghel from the Netherlands.

This 3 year old boy was entered in Champion Class and another choice of Mrs Vermeire. Mr Heinesche was the one who sent him to the finals. The Best in Show dog of this edition was the Cairn Terrier, Limecastles Gangster Of Love. This dog was also entered in Junior Class and won it from strong competition. Mr Grüttner chose him from 19 entries and granted him also the lucky ticket for the finals.

Mrs Alice Zanchi came from Switzerland with him with probably good hope, but I suppose she never expected to end up that high. But this dog stands like a statue, full of self-confidence. He has a bright future ahead. 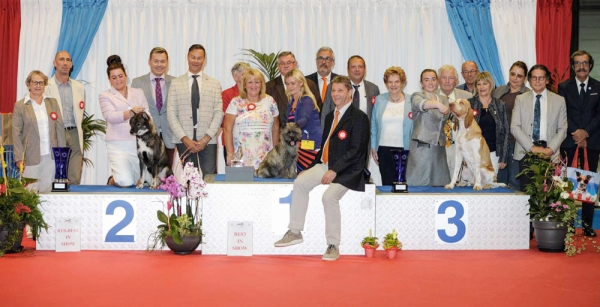 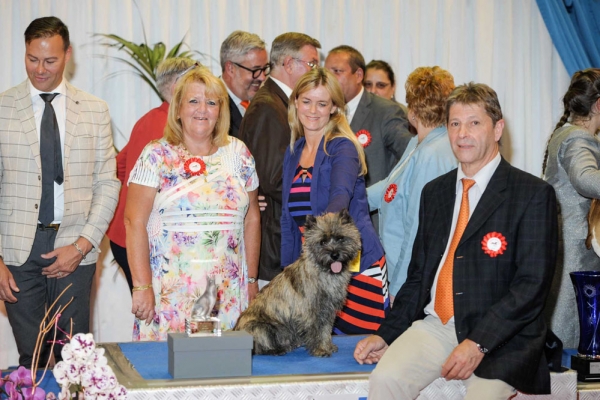 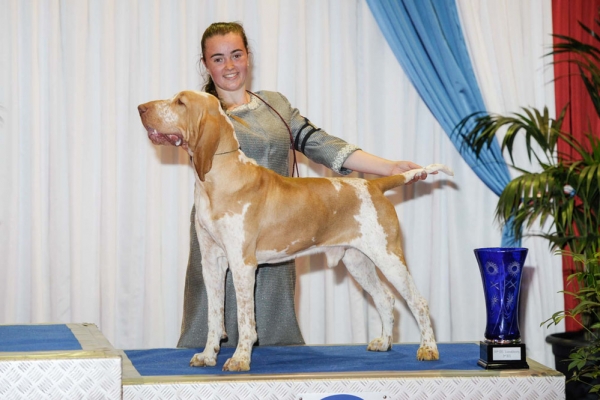 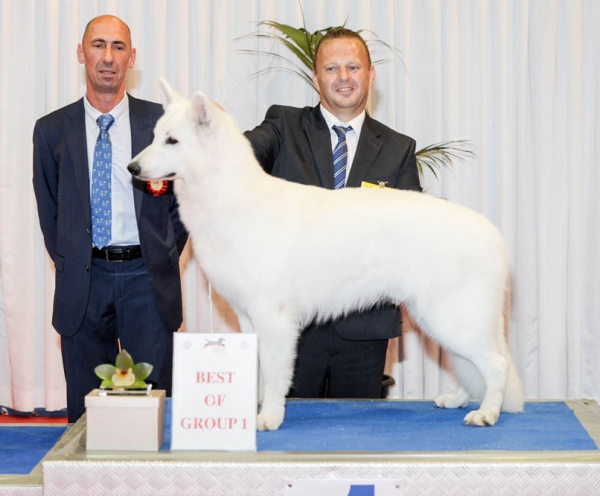 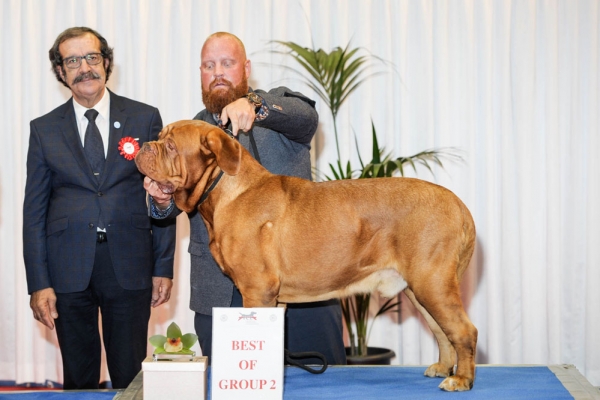 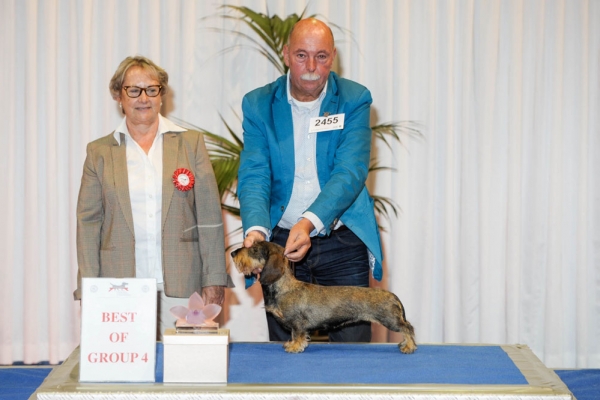 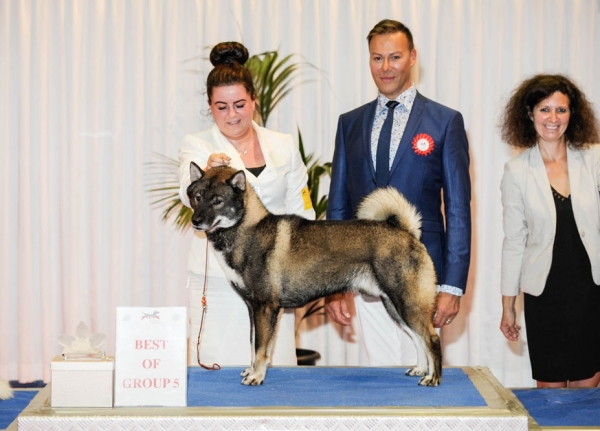 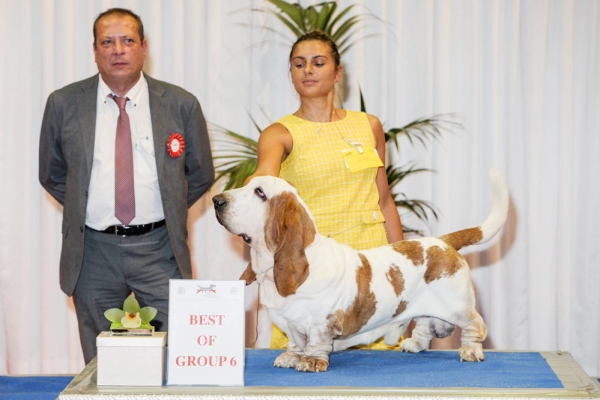 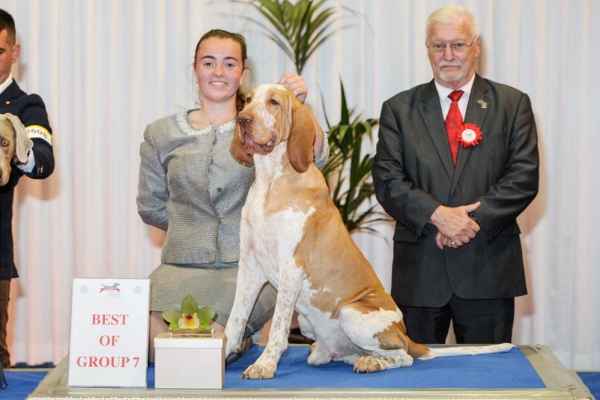 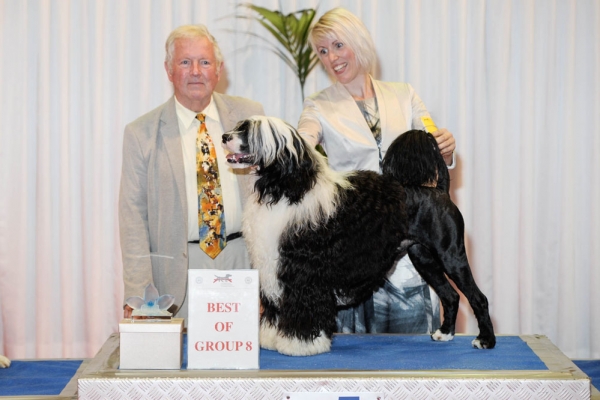 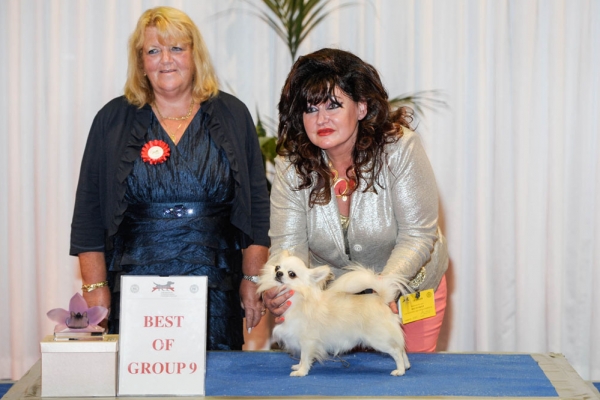 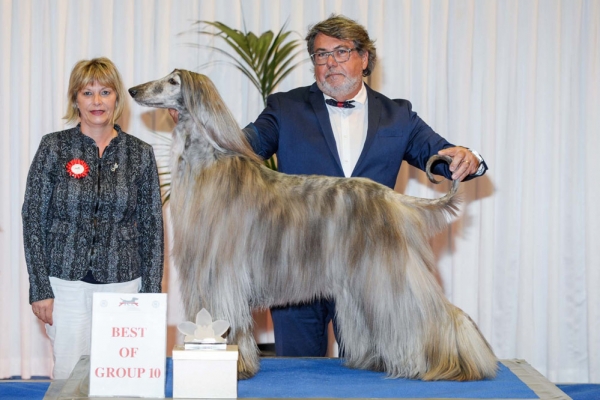 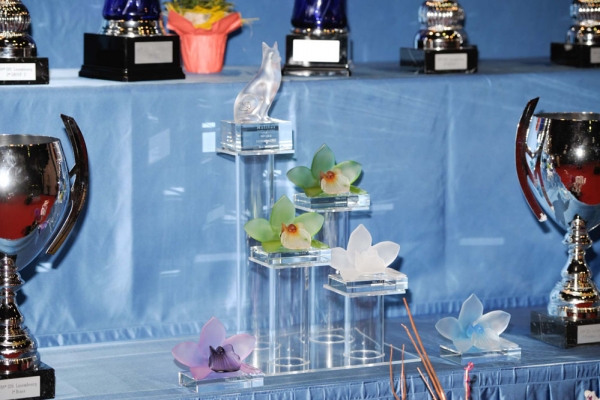