Updated Shows
*For a small fee to cover our administrative costs you can have access to the member’s area where you can read the latest news from shows around the world.  Learn More
Thursday, 08 June 2017 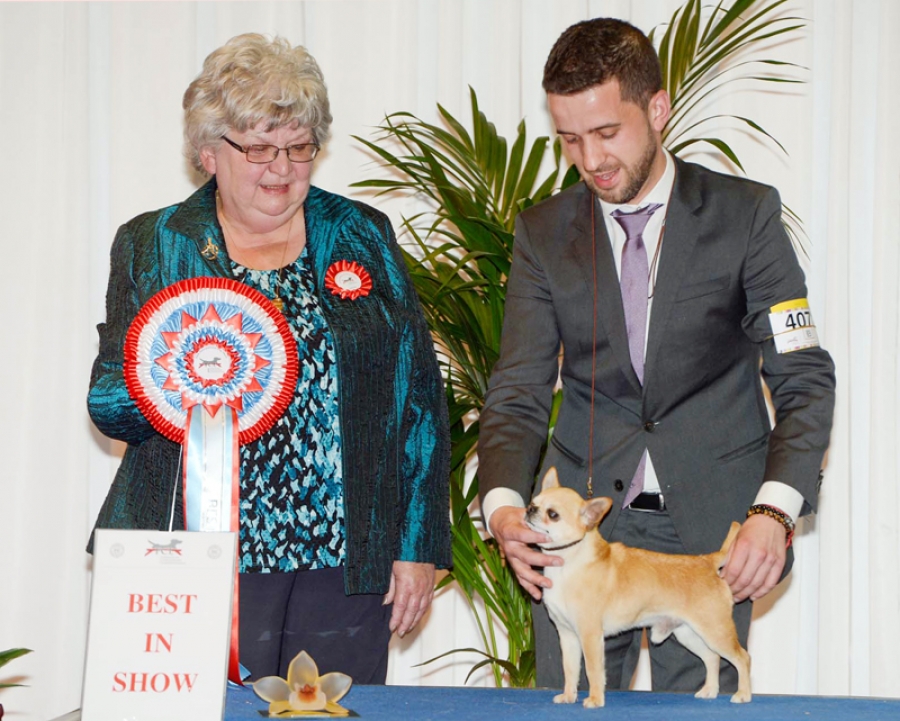 Best in Show at the Luxembourg springs how was the winner of Group 9, the Smooth Chihuahua, Dartan The Valiant Aladar, owned by Sandra Ludmir from Spain. BIS Judge was Mrs Liliane De Ridder-Onghena (Belgium). Photos by Karl Donvil

With almost the very same number of entries as last year, the spring show of Luxembourg seems to remain high on the list of everyone who wants to start a champion career for their dog. Last years total number of entries was 4,560, and this year it was 4,551.

Saturday was the more quiet day with 2,085 dogs to judge. They belonged to Groups 2, 3, 4, 7 and 10, but it looked somewhat strange as there were very few  trade stands compared to previous shows. The ones I spoke to were not unhappy, less trade stands means less concurrence and most of them had a good turnover.

In spring the fee is more expensive compared to the autumn edition that attracts less exhibitors in general but more stand holders. A rather funny situation.

View the embedded image gallery online at:
https://ourdogsinternational.com/show-reports/west-europe/luxembourg/luxembourg-spring-show#sigProIdfddc1c612d
Thirty different nationalities were represented. From France came no less than 1,353 dogs, the best represented country here. Germany was good for another 977 dogs, Belgium for 801 and the Netherlands for another 456. The remaining dogs, almost 1,000, came from other European countries, except one from the USA and another from the Philippines. Exhibitors from the United Kingdom have also found the way to Luxembourg for many years, I counted 132.

There were even 17 from Ireland, and if it was not so complicated to come over I'm convinced there would be many more.  From Russia there were 95 entries. Spain was also well represented with 122 dogs and Italians are also very fond of Luxembourg, there were 166 of them. With so many dogs, one can expect some rare breeds too. The Câo Fila de Sâo Miguel and the Epagneul de Pont Audemer were shown here.

The main ring was attractive as usual. No main sponsor this time. On the Trophy table were a few special awards of the Best Junior In Show, Best Veteran in Show and Best In Show, hand size flowers made from coloured glass, very delicate, but very beautiful. The eldest dog in show was also awarded with a glass statue of a dog. The lucky dog was a Standard Dachshund, 12 years old. Nice to pay attention to the oldies and important too as they are the proof that pure bred dogs can be sound and healthy till a very old age. Behind the trophy table was a huge LED screen with live monitoring of the ring and display of the numbers and breed. Several cameras followed the judging from different angles and this was also streamed instantly on the internet. The main ring program started from 2.30pm and on Saturday it lasted till 7pm and on Sunday even till 7.30pm. That is very, very long! There are hardly any people around the rings at this time, probably people waiting for their partners who are still in the main ring.

View the embedded image gallery online at:
https://ourdogsinternational.com/show-reports/west-europe/luxembourg/luxembourg-spring-show#sigProId4321df948e
The trade stands are almost broken down and some even left. The result is an anticlimax, only because the main ring program is overloaded and takes much too long. It would be better to start the main ring program at 4pm. That would make the ring more attractive for the audience. In fact this is the way most organisations do it. The show would probably end around 6pm, which is a good time to leave for families and exhibitors who need to drive back home to all parts of Europe. Judges would have a little more time for lunch and could go back earlier to the hotel and get some dinner or rest. If there would be a real prejudging behind the main ring, it could make things go much more smoothly and faster and easier to keep up attention till the very end. The time to judge the Minor Puppies, Puppies, Veterans and Juniors could be reduced by two thirds at least.

As usual there were a lot of judges invited and the average dogs per judging day was 72.3 and that is a very good score. 34 judges were invited from as many as 13 different countries, all from Europe.  Mr Vlasto Vojtec from Slovakia had 88 Dobermanns on Saturday 89 Rhodesian Ridgebacks on Sunday. Mrs Linda Volarikova was also a hit with 107 entries on Saturday including 79 Miniature Schnauzers and 76 dogs on Sunday. Mr Vanaken from Belgium had the same number of dogs on Sunday. On Sunday he judged all the Great Danes and that was a busy day for him with 122 entries. But Mr Colm Hastings from Ireland was the topper of the weekend with no less than 265 entries. His breeds on Saturday were all out of Group 7. On Sunday his high score of 120 was reached thanks to 78 Aussies. Mrs Carin Swysen from Belgium had also more than 200 entries.

View the embedded image gallery online at:
https://ourdogsinternational.com/show-reports/west-europe/luxembourg/luxembourg-spring-show#sigProId5d12302fb0
She shared the Dachshunds with Mrs Petroula E. Richard who had 66. Carin had 94. On Sunday she judged all the Golden Retrievers, 108! On Sunday there were several judges with more than 85 entries, Mr Allesandor Zeppi from Italy with 95, 79 of them Cocker Spaniels, Mr Vanhoenacker from Belgium with 111, 74 of them Pugs, his compatriot Mr Victor Van Raamsdonck with 117 entries, 106 were Chihuahuas, from Lithuania Mrs Ramune Kaslautskaite who did 115 Spitzs, Mrs Isolde Huber from Germany with 99 entries, her top breed were the 63 Beagles. Mr Bojan Matakovic from Croatia had both days slightly over 85, 86 and 88. Labradors and French Bulldogs means high entries, and Mr Anthony Kelly from Ireland scored 95, Italian judge Mr Massimiliano Mannucci 89.  The same with Chinese Cresteds and Poodles, Mrs Iveta Vojtekova had 90, thanks to her 64 Chinese Cresteds and 75 of the 105 entries for Mrs Gabriela Ridarcikova were Poodles. Mrs Kristina Nolke judged on Sunday only, she had 87 dogs.

Best In Show judge was one of the few Belgian all-rounders, Mrs Liliane De Ridder-Onghena. She chose three nice dogs, the Fox Terrier Wire, the Barzoi and the Chihuahua Smoothhair in that order. The 3rd place entered first, the Fox, Mr Victor Malzoni Jr from the UK is his owner and his name is Hampton Court's Monte Cristo. He is American bred and almost 6 years old. He was chosen twice by Mr Bojan Matakovic. The first time he beat 14 other Fox Terriers and later all the other Terriers. The Barzoi was the choice of Mrs Ruth Wagner from Luxembourg out of 25. It was another male and his name is Russkiy Azart Ceranus Valiant Invictus, and living with breeder Maria Lazareva since 2015 in Italy.

Mr Van Raamsdonk had 47 Chihuahua  Smoothcoats. and he picked out Dartan The Valiant Aladar, a 4 year old little prince from Spain. He was entered in Champion Class Males too. Before he could go to the BIS ring he had still to impress Mr Vanaken who judged Group 9, but that was for him no problem. Our little soldier finally climbed the highest podium without a problem and received the delicate flower  to hand it to his owner Mrs Sandra Ludmir before going back to Spain.
Next edition of this show is planned for 2 & 3 September, that will already be their 95th show. 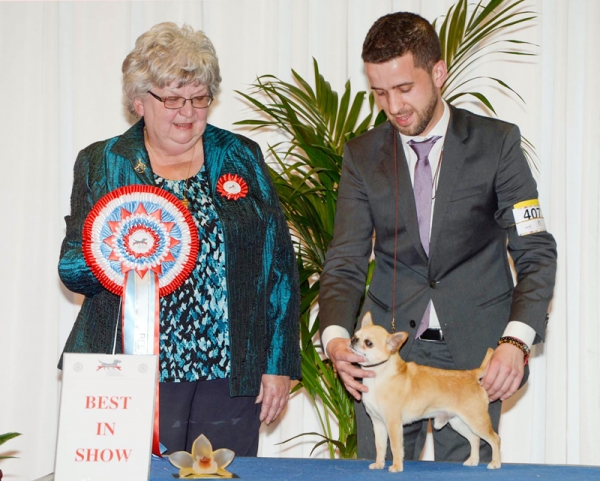 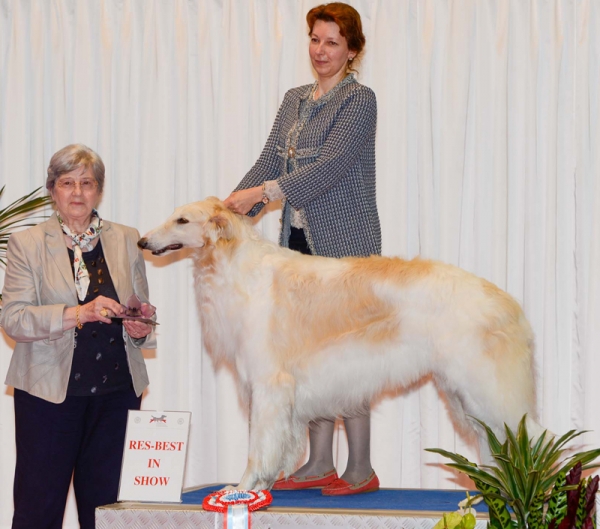 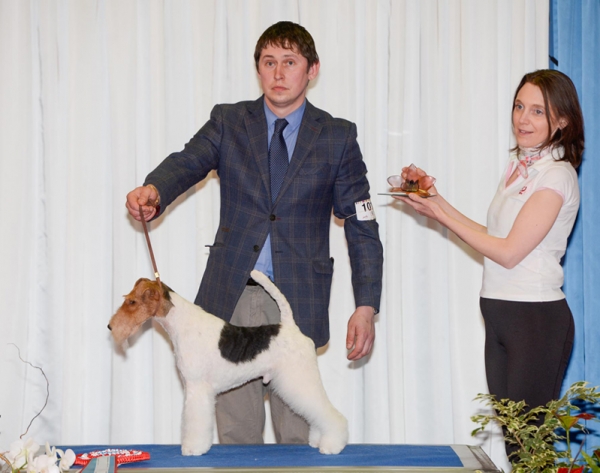 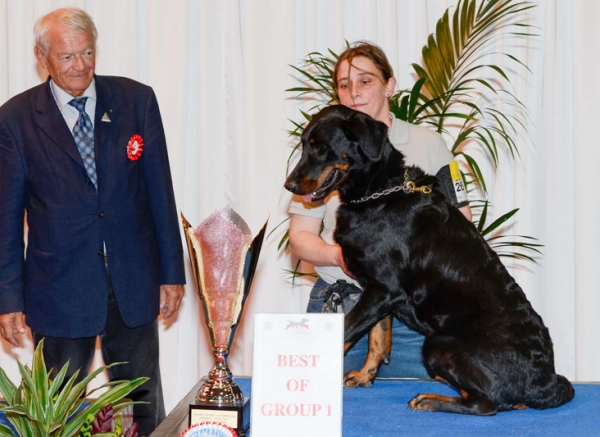 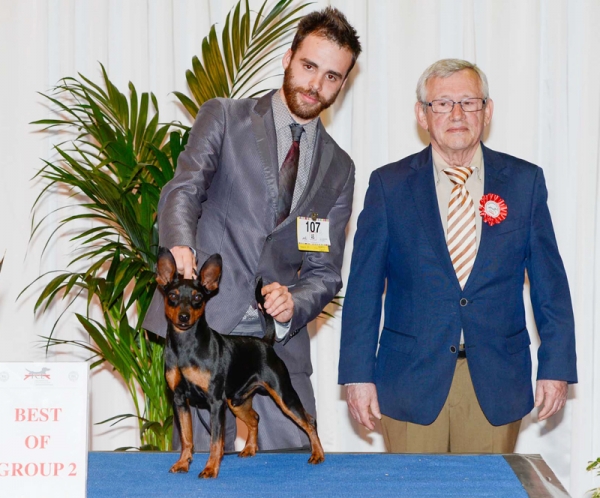 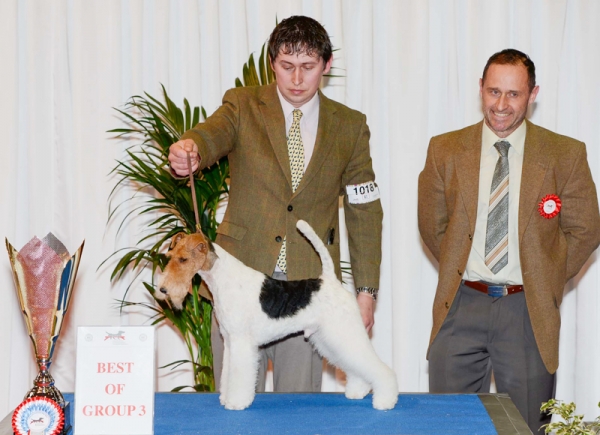 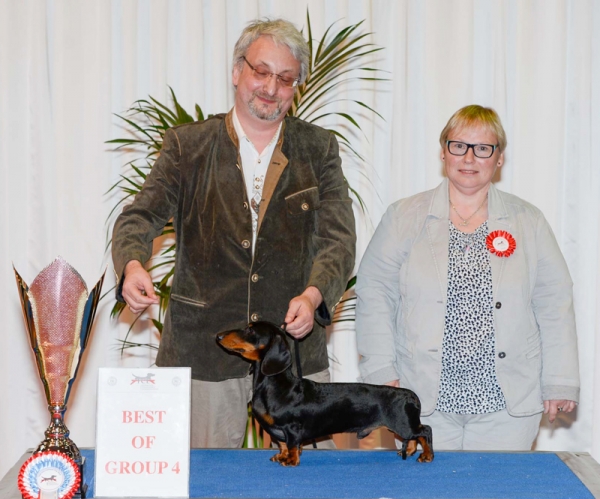 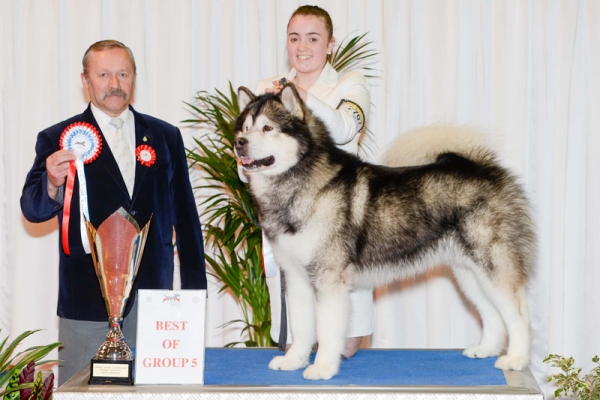 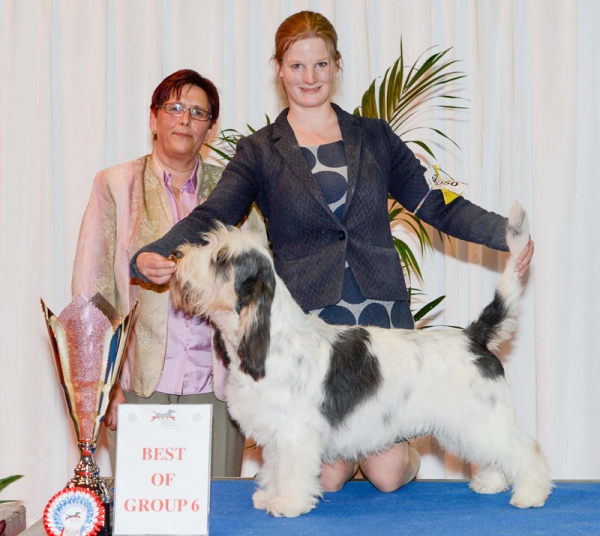 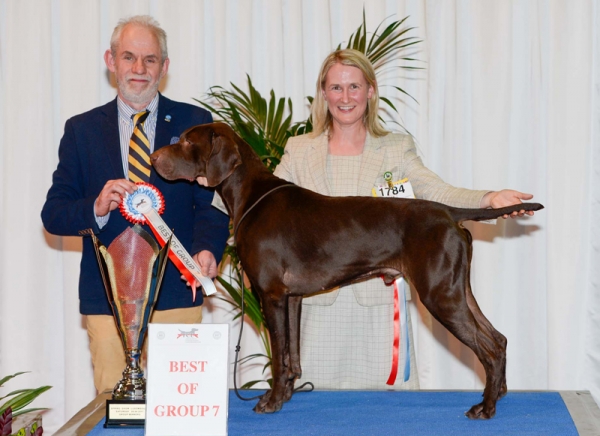 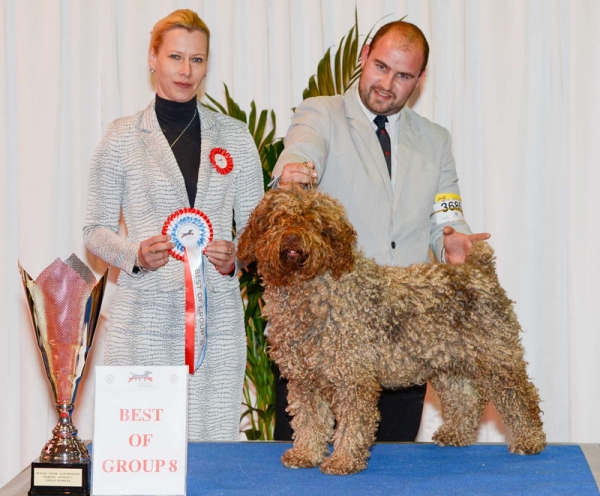 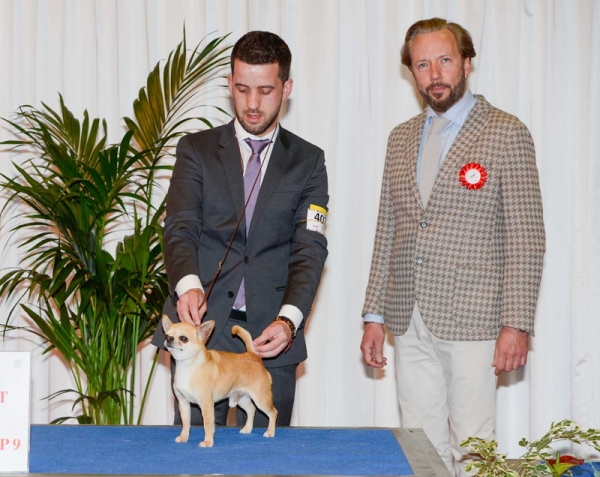 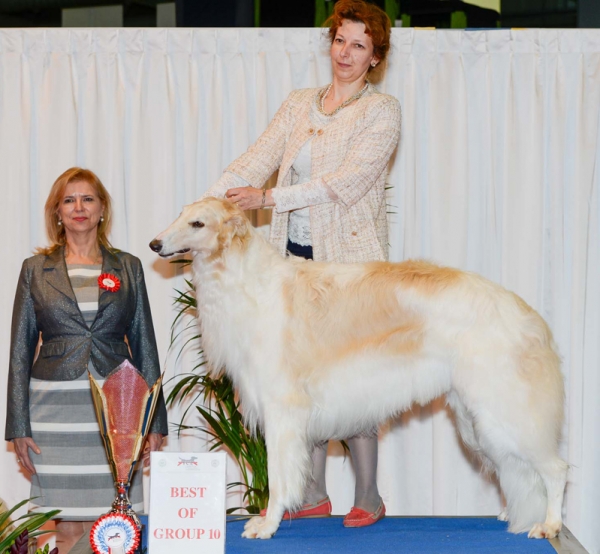 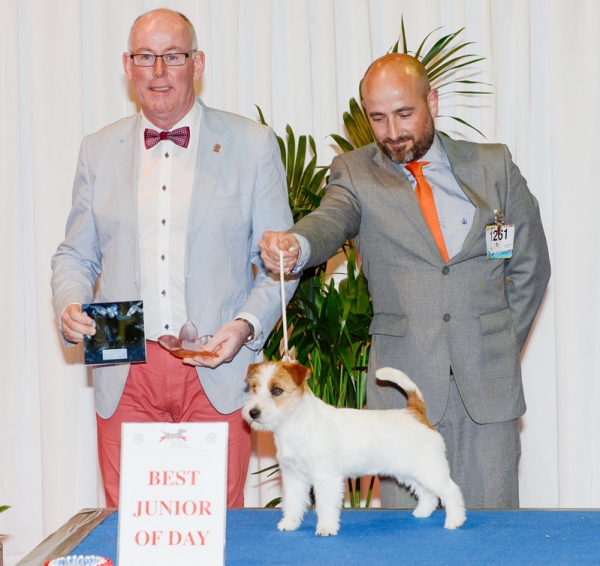 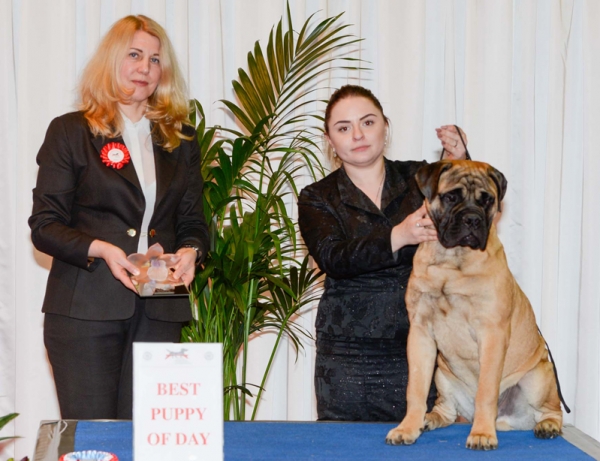 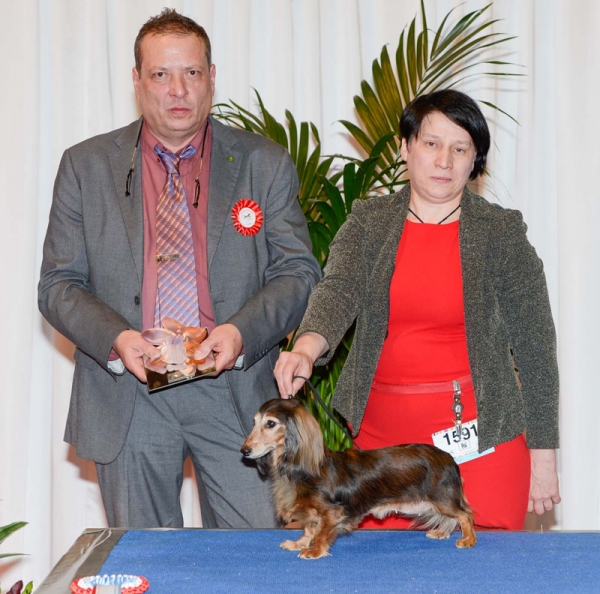 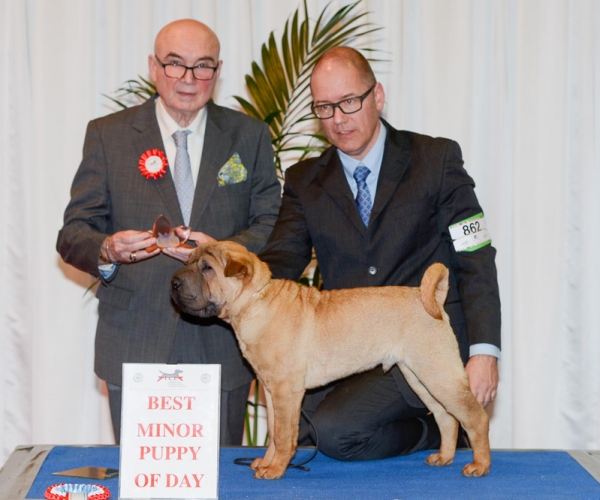 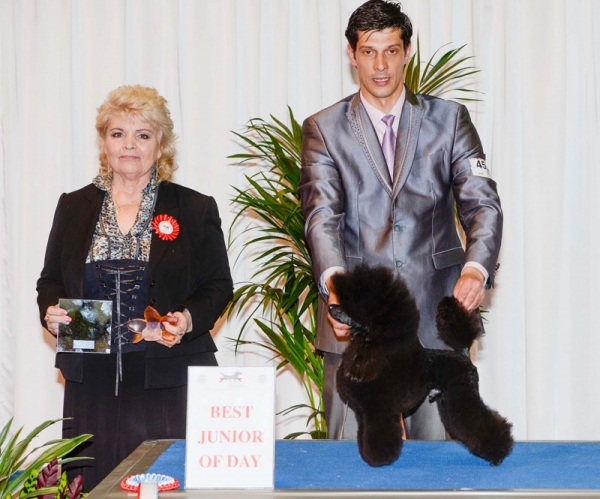 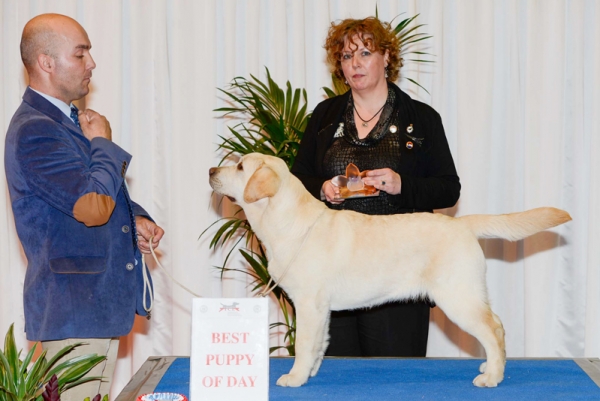 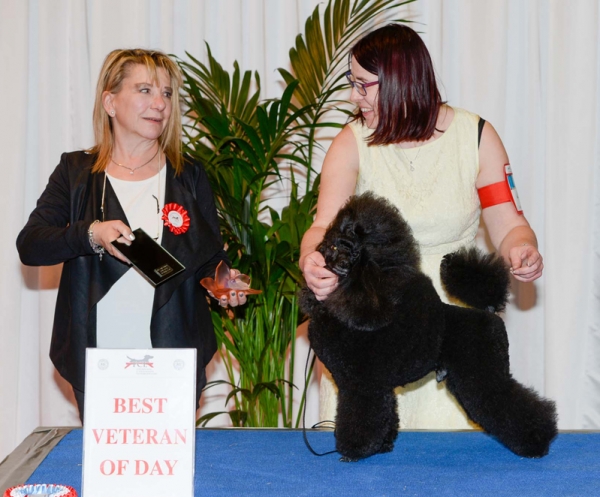