Updated Shows
*For a small fee to cover our administrative costs you can have access to the member’s area where you can read the latest news from shows around the world.  Learn More
Thursday, 11 July 2019 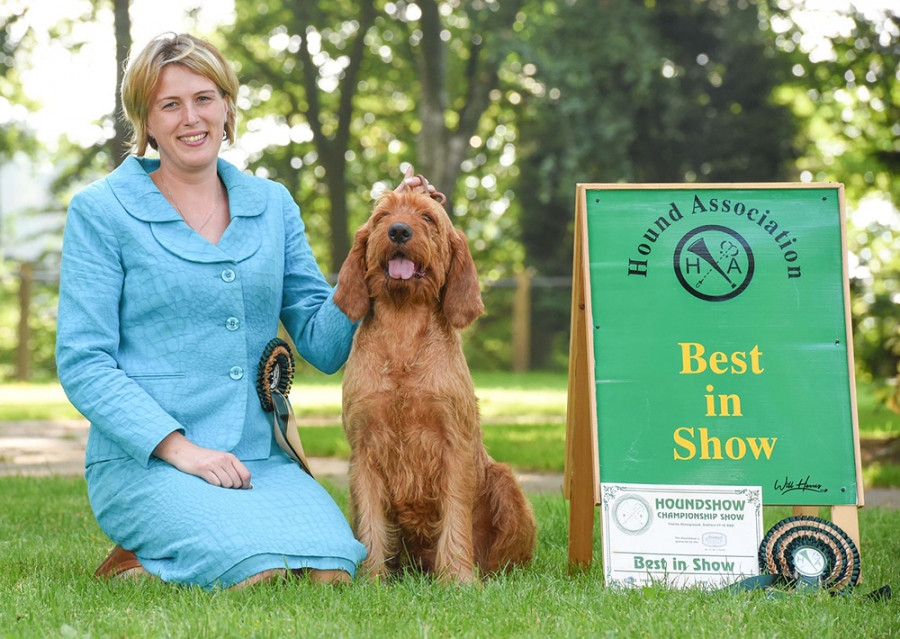 Best in Show at The Hound Association last weekend was the Basset Fauve de Bretagne, Hibeck Dino handled by Claire Cooper and owned by Jean McDonald-Ulliott. Photo by Will Harris

The stirring music of the National anthem marked the opening of show, a firm favourite with hound exhibitors.

This year all judging was indoors because of the condition of the grass surface, which was pitted and uneven – too much for running with dogs. The Houndshow committee have worked with the showground suggesting various strategies, some of which have been employed but still the ground is sometimes problematic.

View the embedded image gallery online at:
https://ourdogsinternational.com/show-reports/west-europe/uk/hound-association-2019#sigProIdeacab11746
Secretary Paul Singleton explained that there was a slight drop in entries but it had still drawn dogs from all over the UK and Ireland, Europe and even Russia. There was a raft of Breed Club shows taking place, apart from saving exhibitors travelling time and money, it improved entries for both Clubs.

Championship shows were held for Bassets, Basenji and Dachshunds and Open Club shows for Borzoi and Hamiltonstovare, Cirneco Dell’ Etna and Norwegian Elkhounds. Irish Wolfhounds had a Limit show.

The new Margaret Everton Pavilion was being used for the first time by the Norwegian Elkhounds and Finnish Spitz. There was a good selection of stakes classes and the Committee had a surfeit of offers to steward. Stewards are given a small monetary gift here and they do have a central core of regulars as well. Generous sponsorship means they can provide more for exhibitors whilst keeping down costs.

All of the behind the scenes organisation means that on show day things go as smoothly as possible. The first classes began at 9am and everything kept moving on well from then. The call for pre-judging of Best Puppies in breed went out at 2.15 and this was started in a nearby ring. This saved time at the end of the day when the groups were being done. The main group was started around 3.30. with Graham Hill as commentator.

This year Ken Sinclair (Araki) was Best in Show judge and also deciding on the Best Puppy and Best Veteran in Show. Ken is a top breeder with Champions in several breeds and also in horses. He has bred a Crufts Best in Show winner in Tibetan Terriers and several Afghan Champions. He awards CC in many of the hound breeds, so well qualified for the special appointment today.

He asked them all to move again individually to make his final choice and walked toward the Griffon Fauve, Hibeck Dino ,much to the delight of the ringside who cheered and applauded this win. Handler Claire Cooper was thrilled. She shows Dino for owner/breeder Jean McDonald-Ulliott and this means he has won BIS at both Hound shows this year as well as Blackpool. He is a history maker for the breed since he was the first of the breed to be placed in a group then the first to win a BIS. As Jean said to me later the year just gets better and better for him!

Reserve Best in Show went to Rob Wheeler’s Whippet Champion Mythic Balder Des Plaines Des Bruyeres Avec Ranveli(Imp) JW. This is an import from France winning a fifth CC on the day and from three BOB wins it has twice taken group four and this Reserve Best in Show.

Chris Amoo was absolutely delighted to win a first CC with his young Irish Wolfhound Sade Rainbow. She has one RCC and beat her mother Champion Sade Arya who took the RBCC. Not only that her litter brother Sade Paris won the RDCC so it looks like Chris and Julie might possibly find another pot of gold with Rainbow and her brother!

Fourth place in a superb group was Zena Thorn Andrews with Drakesleat Evan Sent. It was a third CC so this is yet another Drakesleat Champion. Number 152 to be exact! Zena had a good day at both shows winning the DCC with his brother at the Club Show then the Viscount Chelmsford Champion stakes as well as Best Puppy in Breed going on to take Best Puppy in Show at Houndshow.

An interesting mix for the rest. Around a quarter of the BOB winners were imports from various countries. A new champion in Beagles for Serena Parker. She won her third CC and BOB with Serenaker Elle’s Belles. This was a very poignant win for her since this litter was born the day Eleanor Bothwell died and were all named in her honour. Eleanor was one of our top judges, well respected and well liked. She was also mentor, friend and supporter to Serena. So for Serena this was a very special win indeed.

The Afghan BOB is a Champion in three European countries as well as the UK. This was Multi Champion Takhira Like it Like That (Imp) (17 CC and a group winner) owned by Claire Millward and Stuart Mottershaw and handled by Claire. The BP in Afghans was also an import from the USA, Sarah Dunsdon’s Aus Ch Zandeena Getn Cort In The Act (Imp) (10CC) won BOB Basenji from a lovely entry of Basenji. I think the DCC winner was taking a first ever CC win after a RCC recently.

Fiona Mackay won BOB with her Fauve Ch Shiroblam Rumba (9 CC wins so far) and a double win for the Shiroblam kennels. Another kennels celebrating a double win today was the Tarmachan GBGV with BOB to Ch Tarmachan Cartier (record holder now on 36 CC and a BIS winner). Yet another double winner was in PBGV where Soletrader took both CCs, Kyle Cadmore and Lizzie Greenslade own both CC winners and I believe the DCC was handled by young Erin Robertson. BOB was Soletrader Only in Oslo and litter mate Dancing in Deli won the BCC - a first CC for both, also both RCCs were won by the Soletrader kennels so a great day for them.

Cindy Dare made up her Long Haired Dachshund Darsoms Zocratees. I asked how many that made but she had lost count! Roy Wood won the 26th CC with his homebred Mini Long Ch Wildstar Wrobinson JW but by the time the group was judged he had won yet another at the Club Show taking place alongside the Houndshow! In Mini Smooths,  Andrea Callow won a first CC with Garthorne Grace Kelly. This is another kennel with a long history of winners. Lesley McNaughton was rather pleased with her BOB in Smooth Dachs, this was Ch Cedavoch Rainstorm (5CC) and her litter sister, also a champion won the RCC.

Her Longhaired Dachs also won the BCC and then at the club show was BOB. A special mention to another new Champion in the breed however since this was breeder Vicky Wands first ever champion. Wanderhund Viva Las Vegas is owned by Dr Chauhan. It won its first CC here last year I think and is also his first Champion.

Another long standing and winning kennels is the McCalmont’s Silvae Wire Dachshunds and today they won with Silvae Trademark (2 CC). Nicola Bailey was delighted to win the BOB with her homebred Deerhound Ch Grayflax Lady Sings the Blu’s (7CC) This is another kennel that keeps on producing winners.

Karen Byrne and Angela Cavill were BOB in Finnish Spitz. Stuart Byrne showed Ch Kekkeruusin Emma through Toveri (Imp Fin) taking a 16th CC, another Import winner taking BOB Foxhounds do not have CC but once again Rosemary Griffith showed her team taking BOB again with Dazzleby Chorister. Rosemary is a stalwart of the breed. Greyhound BOB was Roisin Howlett and Clare Boggia’s Ch Ina’s Fashion Dedicated to Boughton (imp). Another Import and not yet two years old, winner of 5CCs.

Diane Cook was BOB winner in Hamiltonstovare with her Dutch Champion Flixtonia Would You Believe at Tedandi.(20 BOB). A new Champion in Ibizans for Joan Hamilton and Viv Rainsbury with Kalo Skilo’s Rose De Immortal Juno with Harrisclub (Imp) and 3 BOBs. Norwegian Elkhounds was won by Elaine Simms with Ch Seasara Earl Grey (6 CCs) Otterhounds was topped by Ch Teckelgarth Maximus (19CC) owned by the Smith family and breeder Maria Lerego. In otterhound bitches the RCC was withheld and only a RBOS awarded.

Laura Merryweather was delighted to make up the Pharaoh Reedly Road Rochlyn to Ynchreenoo (Imp). She is a regular traveller from the Isle of Man with this Russian Import she owns in partnership with Sam Fletcher and breeder Maria Evteeva. Susan Brundle won yet another BOB with her homebred Portuguese Podengo Brundledean Cisco.

Jane Anthony had travelled over from Ireland with her homebred Rhodesian Ridgeback Champion/ Irish champion Rottzridge Nemesis (5CCs). This one is a group and RBIS winner in Ireland. The Saluki BOB was Sharon Littlechild’s Champion Classicus Baroque at Ravensett. (4 CCs) and a lovely double win for her as well taking the BCC. Sloughi BOB was taken by the German Import Xandu Khan Schuru-esch-schams owned by Mrs De-Souza, Clare Boggia and Heidi Woodgate who handled. (3BOB).

Well that is the run down of the rest of the winners in the main ring. Ken Sinclair was also deciding on the Best Puppy in Show and his final four was as follows. Best puppy in Show was Zena Thorn Andrews and Lynda Billinghurst’s Mini Wire Dachshund Drakesleat Kumquat May. This win completed a great day for the kennels with CC and RCC wins from both shows, Adult group fourth place winner and another new Champion. Noble and Gardener’s Afghan Aqua’s The Bitchisback (Imp USA) was runner up. Third place to Tim Jones and Stephen Jepson with their homebred Beagle Eardley Anna Sasin and fourth was Mrs Barter’s Deerhound Ehlaradawn Idril.

Best Veteran in Show was Jill Cowper’s Norwegian Elkhound Champion Rothenberg Lola, Jill Peak was runner up with the Beagle Champion Bayard Make Amends  The BOB Afghan, Multi Champion Takhira Like It Like That (Imp ) was third in this group and BOB in Grands Ch Tarmachan Cartier was fourth.

The final three groups had been prejudged and were introduced to the ring before a shortlist was made. This meant that all judging at Houndshow was completed sharply and another successful show was over. Looking forward to next year already!

Hound Association Photos by Will Harris 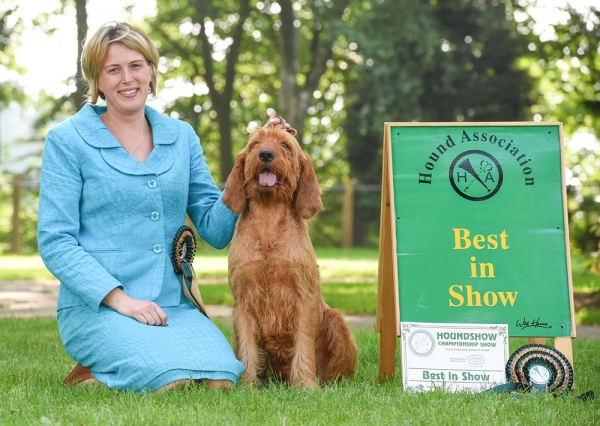 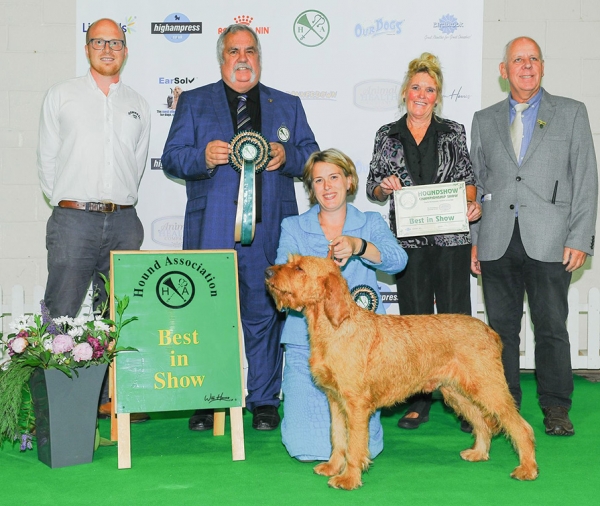 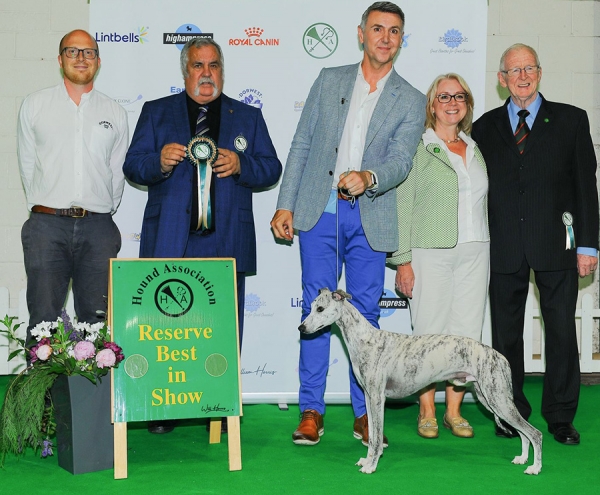 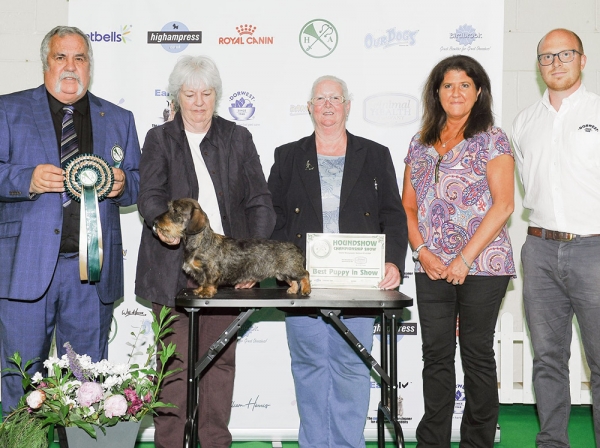 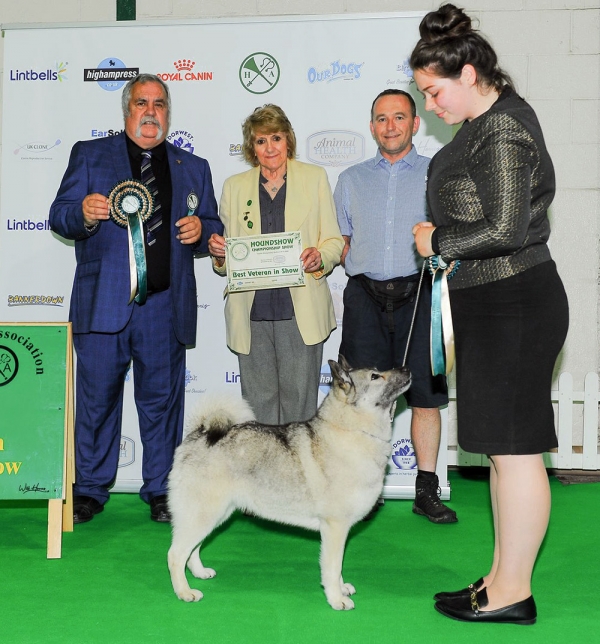 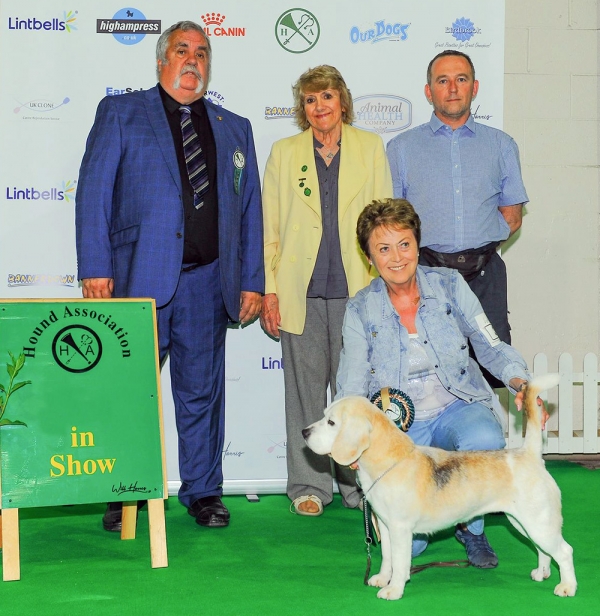