Updated Shows
*For a small fee to cover our administrative costs you can have access to the member’s area where you can read the latest news from shows around the world.  Learn More
Wednesday, 24 July 2019 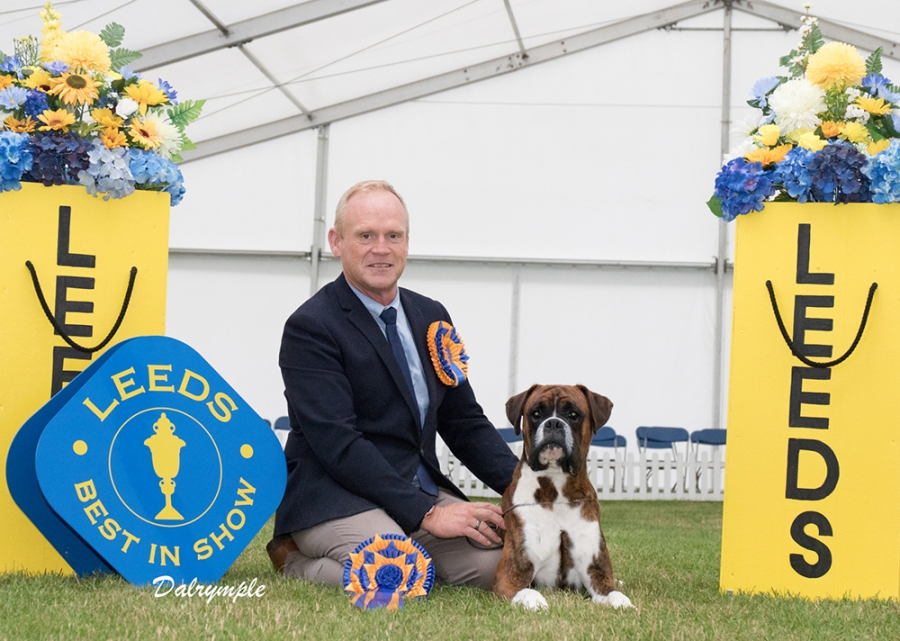 Mark Cocozza judged Best in Show at Leeds Championship Show and from a line up of seven quality dogs his choice was the Boxer, Lanfrese Argento owned and handled by Mitch Griffiths. By Ruth Dalrymple

His Reserve the Eurasier Stacey Watkins’ Junior Ch Albionspitz Blue Moon BJW 18 BW 19 WW 18, JWW18. Kevin the Boxer was bred by Mitch Griffiths and this was his fifth CC with Best of Breed. This was his second group win and today the kennels also won the RDCC with Kevin’s uncle, a class win with brother and third in open for another of their Champion kennel mates.

View the embedded image gallery online at:
https://ourdogsinternational.com/show-reports/west-europe/uk/leeds-championship-2019#sigProId6711ae37c9
Not a bad day at the office for this team and of course this POTY qualifier, Junior group and RBJIS winner also went on to take Best in Show. In charge of all puppy group decisions was Albert Wight. Best Puppy overall was the Whippet Cobyco Cover Girl bred with her mum Eva Jacoby, who was celebrating her 80th Birthday this weekend at the show.

Reserve Best Puppy in Show to the Toy group winner Donzeata Royal Viscount the Griffon Bruxellois. Dave Killilea sorted out the Veteran choices giving Best Veteran in show to the Samoyed Champion Nikara Diamond Dancer who had just come second in the Pastoral group and this completed a great weekend for owners Val Freer and Sue Smith with the Standard Poodle Clare Furey’s Champion Somanic Style By Design at Clanese as his runner up. Well that was the end of the show but where did it all start. It starts on a 90 acre blank area dotted with trees.

Nothing is there at all and everything has to be brought on site after the show architects have created the layouts. Two days of measuring and marking then on come the marquees and things begin to take shape. Decisions and plans are made throughout the year as we know but nearly a fortnight prior to the show the team arrives to create the event. Harewood house as a company have strict rules about what is allowed plus at the end of the show, a team of volunteers and friends come on site to litter pick because again the ground cannot be signed off unless it is pristine. Do remember then when leaving to put all your waste etc into the plentiful litter bins.

These things may seem small but they can add to costs long term which have to be covered. I did notice that this is a ‘Yorkshire’ run show which an eye to keeping costs down. They encourage recycling of rosettes and folders from the judges, their signature blue and yellow flower theme uses the same flowers year on year but re arranged by Terry Burgess. I spotted a few other economies which can only be good long term for entry fees. I spoke with Secretary Liz Stannard about some other aspects of the show. This year was their first with an allocation for every CC breed.

The committee was delighted with the entry which was a superb percentage increase of just under 11 per cent and more overall with second entries. They had tried to support some first time judges and group judges as well as having eleven breed shows and a group show taking place alongside the main judging. The small committee is on hand from very early morning to completion of judging each day and they deal with a huge variety of queries and requests daily.

They are not the only ones multi tasking however and one person very busy over the weekend was Frank Kane. He judged several breeds and did the commentaries for the groups. He never had a moment to sit down and on Saturday was busy in the ring when the groups started so Liz stepped in to commentate the first of the groups. We are lucky that we have some really good dog people here in the UK and many of our experienced judges are in demand here and around the world.

The weather took centre stage somewhat this weekend with extremes of heat on Friday and rain on Saturday. Friday every second dog was in a cool coat or similar and few were moved around the showfield unnecessarily whilst Saturday saw them in their raincoats and again not moved much outside in the torrential showers. Luckily it had been so dry that the ground underfoot was brick hard and the surface on Saturday was not as bad as it might have been.

I noticed some steel walkway had been laid where there was extra traffic and on Sunday, although still a bit muddy, as the day went on the cooling winds dried the surfaces to allow better underfoot conditions. Shows with a full set of CCs available for every breed are expected to provide something extra and as well as having the chance to complete the Points of the Dog Seminar there was also the Have A Go Show which was well oversubscribed and both were being organised by Christina Chapman. Christina in turn was being helped by ten year old Maisie Allenby. Christina organised a special surprise for her on Saturday with cake and Junior Champagne!

This was to mark her win in the Semi finals of the JHA recently when she handled a Borzoi – only the second time ever and to wish her luck when she goes forward to the XCEL in October for the finals. Maisie also passed her Points of the Dog Seminar. Another young handler – Isaac Wheeler won the BOB in Norwegian Buhunds and was shortlisted in the group later. It was not Champions corner this weekend but Champion city! New titleholders included Debbie Harding’s Mastiff, Sandra and David Lambert’s rottweiler.

Olivia Carty went back to Ireland with a new Champion in Havanese, the Goodwins made up a Manchester Terrier, Lee Rhodes made up his Staffordshire Bull Terrier, Pam and Gordon MacLellan made up their Belgian Shepherd Groenendael, Joanna Bailey went home with a new Australian Cattle Dog champion, Nicky Mackie, Linda Lester and Sandra Smith made up their Tervueren and Laura Wood took a third CC with her Malinois. Kirsty Russell handled Deborah Bell’s Veteran Smooth collie to a third CC and title at the age of ten.

Stephen Cox handled the GSD to its title today. Bred very much in the purple and following in the footsteps of its mother and grandfather. It is the British Seiger VA winner a very special win and bred by John Cullen. Craig Young made up his Japanese Chin, Hilary Lockyer has a new Schnauzer Champion. A 65th Champion in German Wires for Bareve and that means that both brother and sister are made up and with a double to complete their day. What a fabulous record.

Jane and Ben Bennett had a lovely double win breeding the DCC and winning the BCC and BOB with a third CC. Thelma Ritchie travelled home with a new Welsh springer Champion, Nigel Egginton made up a Spanish Water Dog and a new Golden Retriever Champion has been declared. I am sure there will be more that I have missed! Working group was judged by Jill Peak, the first of three groups she was deciding this weekend.

A special double win which might not have been done before was in Great Danes where a brother and sister pair of brindles took both CC. Handler Heather Vine was delighted to win BOB with Vanmore Maple Syrup then shortlisted to last eight in group. Celia Peters handled Ann Burrell’s Leonberger to a first CC, BOB and group shortlist. Antony Bongiovanni took a first CC with his homebred Portuguese Water Dog, a son of the breed record holder. However the three others placed in this working group were the Dobermann Jojavik Viktor Rizzi at Katemead.

Bred by Jackie and Victoria and owned by Lynn and Alan Edyveane this was a fourth CC win and first time placed in the group. The Bullmastiff was third and is being handled for owner Anna Pavesi by Billy Warren. This was a fifth CC and BOB and Billy was delighted to do the double today with his own from Veteran. Final place in the group was Pat Taylor and Helen Taylor Morris who had a super day with BOB in Siberian Huskies and also shortlisted in the group with Ch Pelenrise Chat A Lot JW ShCM. Homebred out of another of their homebred Champions.

Handled superbly by Melanie Raymond as usual this would be his ninth Group from eleven CC wins, He has won BIS at Three shows – Windsor, East of England and National Working and Pastoral Breeds with another three RBIS wins – great record for this visitor whose winning career started at Crufts with his first CC, BOB and Group 4. He is currently Top Dog all Breeds and Top Pastoral. Runner up was the Samoyed Val Freer and Sue Smith’s Champion Nikara Diamond Dancer who has 47 CC wins now and lots of group places.

He also won the Veteran Group today – his thirteenth then BVIS and his daughter was Best Puppy in Breed. Third place was the Shetland Sheepdog Champion Edglonian Blue Fortune bred by Debbie Pearson and owned in partnership with Emilio Castillo. This has seven CC wins and has been placed or shortlisted regularly. Fourth went to the Hungarian Puli owned by Stan Szyczewski.

This was Champion Weetoneon Buggah The Beaujolais who has 9 CCs and has been group placed four times now. Best puppy was the Shetland Sheepdog with the Samoyed winning the Veteran.